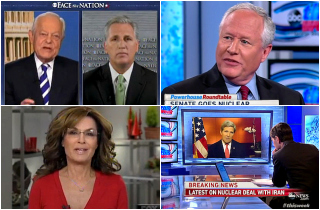 In conjunction with the Pulitzer Prize-winning PolitiFact and their new project, PunditFact, Mediaite will now be fact-checking one or more guests on the Sunday political shows. See below for Matthew Dowd’s turn.

Old Man Schieffer mused in his #justaskin voice Sunday morning whether the surprise deal with Iran—that turned out not to be such a surprise after all—was a ploy by the Obama administration to distract a critical news media from Obamacare.

But with the fate of Healthcare.gov currently in limbo until November 30 at the earliest, the Sunday shows seemed quite happy themselves to have something to do other than speculate on whether a website they have no control over might someday work, whether the complicated mechanism of policy pricing will raise or lower premiums, and what it all means for 2016. So however much the White House wants to talk about Iran, the media might have wanted it more.

A much-happier Secretary of State John Kerry—I swear, you can tell—arrived on the Sunday shows yesterday morning than the one that addressed the selfsame cameras post-Syria. I mean, this guy’s positively elated:

Perhaps the Obama administration has been humbled by the starry-eyed promises that preceded Healthcare.gov, or the overwrought geopolitical rhetoric that gave way to a very scrappy compromise over Syria; either way, Kerry was careful not to phrase Sunday’s deal with Iran in sweeping historical terms, as some media outlets were wont to do. He presented a grounded assessment of what had been accomplished, made the case that it was better than holding our breath waiting for Iran to dismantle its program, and was cautiously optimistic about building upon this negotiation in six months to not only stall but reverse Iran’s nuclear development.

For your rebuttals, see Senators Corker and Schumer. Or don’t, for that matter.

At the exact opposite end of the relevance spectrum—and I mean truly as far as you could ever get from the seriousness of Middle East diplomacy—was Sarah Palin. A shiny moose bullet to anybody who can make sense of this:

“However, if Mr. Bashir, or anybody else in this media elite bubble that they put themselves in were to attack someone who is defenseless, like a vulnerable child, who does not have that podium, that microphone that god has blessed me to be able to express my opinion, if they don’t have that type of platform to defend themselves—well, if you want to see a Mama Grizzly get riled up and slap that person down, then you come after that vulnerable child. In this case, he didn’t come after a vulnerable child.”

Meanwhile, Bill Kristol wants us all to concede that Republican Senators had to do all those filibusters cuz Harry Reid kept giving them wedgies. Raise your hand if you buy that. It’s okay, Kristol’s used to it.

By the by, PunditFact fact-checked Matthew Dowd’s statement that anybody for the filibuster reform used to be against it, and vice versa. That’s a wash, folks.