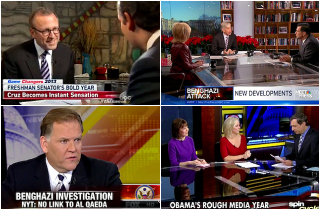 From the be careful what you wish for and then howl about for fifteen months file: after constant conservative carping for the mainstream media to “cover” Benghazi, the New York Times issued an exhaustive report declaring no evidence of al Qaeda involvement, and arguing that the attack was a local militia group inflamed by an American anti-Muslim video, which is essentially where we were on Benghazi fifteen months ago.

This complicates numerous Benghazi theories, such as the fact that there are Benghazi theories. Here’s Representative Darrell Issa (R-Partial Transcript), essentially saying, “Al Qaeda, no al Qaeda, what difference does it make how four Americans died?”:

In case that didn’t pole vault the tragedy-farce gap fast enough for you, Issa also said that he couldn’t be held responsible for his previous statements blaming al Qaeda because he didn’t have access to the classified security files the House Intelligence Committee would have. In Congress, having only partial intelligence is known as “getting Issaed.”

Meanwhile, House Intel Chairman Mike Rogers (R-Shhhh), confirms that if you have all that classified info that he can’t share with you, you’ll totally come to his conclusion—which, curiously, is also his answer on anything NSA-related. Incidentally, if you’re one of those people who can’t figure out why everybody gets into a tizzy about this surveillance stuff, the “I’m right, but it’s classified” answer has a large part to do with it.

Hey, this was a big old peanut butter cup:

Jonathan Karl is the interview equivalent of a relief pitcher who walks every other batter on five pitches—he let Donald Trump get away with birther nonsense in the summer of 2013—and even he can’t buy what Senator Ted Cruz (R-Fauxbuster Blues) is selling.

Over in Media Buzzland, Howard Kurtz concedes that the media maybe will probably get around to reporting on some positive Obamacare stories, he guesses, as that’s kinda part of the story of how Obama’s big stupid law for jerks is functioning. Then he asked Kirsten Powers if she thought the media was piling on the president to make up for their past lickspittletude, and she looked at him like he was a dumb-dumb.

George Stephanopoulos named his entire hour-long 2013 retrospective after Game Change. He should not double down on that. #thistown

Last, credit where credit’s due: damned if David Gregory didn’t have a detailed, focused, and somewhat incendiary show (he even got a theological spat out of the hour!). Like a significant other who gets their act together upon whiff of a breakup talk, perhaps Gregory whipped himself into shape following tales of his rumored demise. If so, NBC should threaten to fire him every Sunday morning at 8:45 a.m.