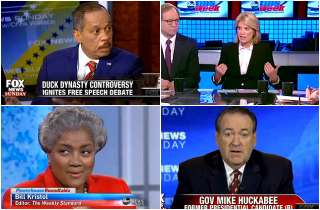 Leave it to the Sunday political shows to actually make the Duck Dynasty controversy seem urgent. It was either rehash that or ponder whether 2013 was “the worst year of Obama’s presidency?!?!!11?11@??!” a) That was 2011, and b) of what possible consequence would it be if it was or wasn’t?

So we return, ever so reluctantly, to The Rhyme of Phil Robertso (it’s Robertso now). Juan Williams, who knows a thing or two about getting fired for a comment, called bull honky-tonk on a conservative movement that burned Dixie Chicks CDs and made sure Martin Bashir will never poop in this town again:

It’s always awkward when someone ensconced in conservative media tries to cross the railroad tracks. Such was the case of Greta van Susteren on This Week With George Stephanopoulos this morning, as the Fox anchor turned in the most awkward performance since Louie Gohmert tried the same transition a few months back. Let’s all hear what van Susteren thinks we should do about income inequality:

So we should “win” the War on Poverty with “new ideas” that are “Reagan.” Incidentally, “what we’ve been doing” is three decades of deregulation accelerated by that selfsame Reagan, so if van Susteren would like to advocate for more aggressive stimulus spending, a more expansive safety net, and the eradication of right to work laws, I hear she has her very own show on which to do so. (Also, read, this.)

Meanwhile, though network pundits like to harangue Obama for not leading with leaderly leadership, calling the President of the United States so “depressing” and “pathetic” that “you want to slit your throat” is still stuff that belongs in the comments section. Thus ended van Susteren’s field trip to the lamestream media.

Donna Brazile, the lone progressive voice amidst Matthew Dowd, Bill Kristol, and van Susteren on This Week With George Xtapolapocetl, womped all of them in turn, but her eye rolls were what really told the story. Brazile is a sincere and visceral advocate at a table full of spinsters, and her face alone rejects their arguments: 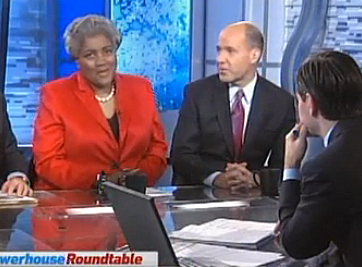 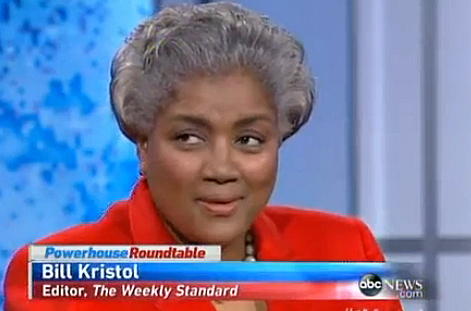 “If anyone says something that holds to the same position that Barack Obama held in 2008, when he was at the Saddleback Church with John McCain—he made it clear very clear that he opposed same sex marriage, and he said he did so because he was a Christian and because of his biblical views. Well, if that position was okay in 2008, how come it isn’t okay in 2013, or 2014?”

Catch that? Roberto was making a moral(ish) argument about homosexuality, while 2008 Obummer was discussing the specific, legal issue of same-sex marriage. By conflating the two, Huckabee tried to pass this off as “Robertson and Obama both hold same ‘traditional’ views on gays.” If you buy this, congratulations, you just won the 2016 Iowa GOP primary.