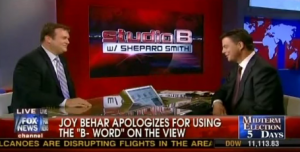 Today on Studio B, Mediaite’s own Colby Hall stopped by to discuss some of the biggest media stories of the week; namely President Obama’s appearance on The Daily Show and Joy Behar’s choice words for Sharron Angle. The two men seemed to agree on a number of subjects, never moreso than at the end of the segment, where they both felt that everyone is benefitting Behar’s comments, be it Angle, The View, or even Fox News and our little site here.

To start, though, they discussed last night’s Daily Show. While many have argued the wisdom of Obama appearing on a comedy show, Hall pointed out that Obama needed “a win” and to be “in a room with a lot of fans” and that that’s just what he got. Smith then played a number of the more contentious moments from the interview and they judged how well the president handled Jon Stewart’s sharper questions.

After that (and a glorious segue featuring a loving shot of our beautifully designed home page), the conversation moved to Behar vs. Angle. Smith reminded viewers that he was actually there for the incident and that Behar wasn’t angry (which was one of Megyn Kelly’s arguments yesterday) but was “laughing like a hyena.” A hyena? If there was ever a statement that would satisfy both Behar fans and haters, it’s the one above.

Smith then wondered “who got to” Behar in causing her to make today’s apology. Perhaps, as Hall alluded to, she realized how much she was helping, not hurting, the woman she was throwing “terms of endearment” at.