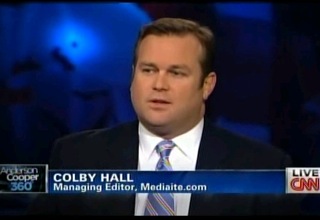 The speculation over Keith Olbermann‘s future after MSNBC continued tonight on Anderson Cooper 360º, where our own Managing Editor Colby Hall joined host Anderson Cooper and the New York Times’ Bill Carter to discuss Olbermann’s latest tweets, what went on behind the scenes at MSNBC, and what the former Countdown host has in store for the upcoming months.

The three seemed to agree, based on the reports of the past few months, on the background for Olbermann’s departure. “The relationship with his managers… had become untenable,” Hall explained, arguing that he “fell on the wrong side” of network politics when it came time to do some corporate rearranging. But whatever the past may be, “he’s got a very loyal following,” Hall continued, one that, as David Shuster noted on his last appearance on CNN, had touched Olbermann.

But while the past gets figured out, Olbermann is back on Twitter and being more cryptic than ever. “He’s sending a signal here,” Carter noted of his latest tweet, “that he has a plan in sight.” Carter predicted that, while his contract prevented him from going on television, it was highly likely that Olbermann would invest in an internet entity, as “NBC won’t be able to prevent that,” but ultimately predicted that “he’s going to be on TV again– why wouldn’t he? He was very successful.”

As for the potential responsibility on new corporate owners Comcast, neither Hall nor Carter seemed to see too many fingers pointed in that direction. On the contrary, it would be preferable for Comcast to not be involved, and also convenient for the NBC powers that be to clean house before the new owners moved in. As Hall put it, “they didn’t want to have one more headache while they figure out what makes their new bosses tick.”