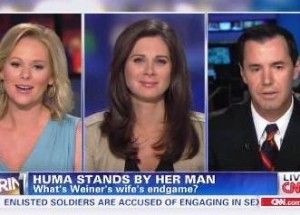 Mediaite’s Joe Concha joined Erin Burnett‘s panel on CNN tonight debating Huma Abedin‘s decision to “stand by her man” and keep helping Anthony Weiner in his race to become the next mayor of New York. Concha took note of Burnett’s and panelist Margaret Hoover‘s pregnancies to make the point that the fact Weiner was sexting women while his wife was pregnant is just “a whole new level of perversion.”

Hoover admitted she’s sympathetic to Abedin and doesn’t consider her a victim, since she made the choice to stay with Weiner after all this. She suggested that these new revelations weren’t worse than the old ones, but John Avlon (her husband, by the way) disagreed, arguing that these new sexts came during his supposed redemption tour, after he resigned and apologized for his behavior. These new revelations, Avlon concluded, are “sleazy and weasely in the worst way.”

RELATED: Weiner Count: A Growing List Of People Who Want ‘Carlos Danger’ To Drop Out Of NYC Mayoral Race

Concha drew a direct contrast between Abedin and the former Mrs. Tiger Woods, who got a lawyer, packed up, got divorced and went away without doing a “tearful sit-down with Barbara Walters.” Concha found it striking how Abedin seemingly thinks “Hillary Clinton‘s moral compass is something to be admired,” and asked Hoover how she would feel if she found out Avlon was doing this while she was pregnant.

Hoover admitted she might not be that forgiving, while Avlon looked very uncomfortable with the new line of conversation. Concha said that sexting is one thing, but to do it while your wife is pregnant is just “a whole new level of perversion.” Hoover insisted Abedin made up her own mind, and asked, “Who are we to second-guess why she’s making her decisions?”