Mediaite’s Kirell, Rothman, And Christopher Battle Over NRA Proposals On The Young Turks 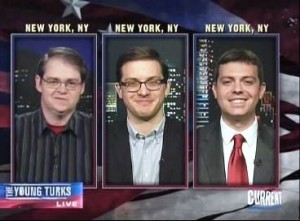 It’s a Mediaite trifecta! Following the release of a report from an NRA-backed group finding, among other things, that teachers should be armed, Cenk Uygur brought on Andrew Kirell, Noah Rothman, and Tommy Christopher, all from this very site, to react to the proposal.

Kirell admitted that libertarians had very mixed reactions to NRA executive Wayne LaPierre‘s now-infamous post-Newtown press conference, citing Ron Paul‘s argument against the NRA’s proposals. Kirell added that it seemed as though the NRA wanted to “sacrifice the 10th Amendment in favor of the 2nd” by federally mandating a “pseudo-police force” in schools.

Rothman later added that univeral background checks, which have a whopping 90 percent support among the public, would be a political winner for Democrats, so long as there are sufficient federal protections added.

Rothman added that some Democrats in swing districts might be “nervous” about backing any gun laws. Uygur brought up the high support for universal background checks to counter, but Rothman explained that the overall culture is “for gun rights in general” and it’s hard to sell new gun laws so far removed from tragedies like Newtown. Christopher blamed the media for creating a narrative that an assault weapons ban has “no chance,” but background checks are likely, because “there’s a bias in favor of not being wrong.”

Uygur showed a clip of a Newtown father coming out in favor of the NRA’s plan. Christopher said it’s really just an organized distraction to keep anyone from actually doing anything about guns. Rothman countered that if the GOP was really singlehandedly holding up gun laws in the Senate, then the Democrats “would be forcing them to filibuster” in public. Christopher countered that Republicans have threatened to filibuster, and said any Democrats publicly not on the fence will probably end up voting for it once they’re forced to justify their hesitation to grieving parents.

Watch the Mediaite smorgasboard below, courtesy of Current TV: