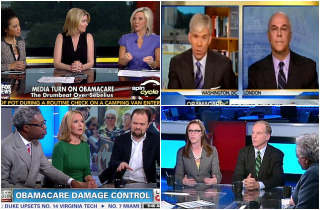 No doubt you were up late Saturday night watching the worst World Series call of all time (what was Will Middlebrooks supposed to after the ball got past him, stay on the ground and read a magazine?), and so you slept through the Sunday shows. Here’s what happened while runners were being tagged out at third in your dreams.

Aside from calls for Health and Human Services Secretary Kathleen Sebelius to be fired (collect ’em all!), a dominant theme emerged from the scattered segments: Obamacare needs “young invincibles” to sign up in order to work, and every day HealthCare.gov doesn’t work drastically lowers the number of young, healthy people who will join the exchanges and thus make them affordable. The argument was best articulated by the New York Times’ Ross Douthat and The Hill’s A.D. Stoddard on CNN’s State of the Union:

“The policy is the process in this case,” Douthat said. “The design of this system is built around getting a certain number of people to use the website and sign up.”

Cornell Belcher argued, correctly by the way, that Massachusetts had a similar issue with what is now known as Romneycare, only to find that All The Young Punks signed up at the very last minute. Kidz!

The face Bill Kristol makes when Howard Dean is speaking: 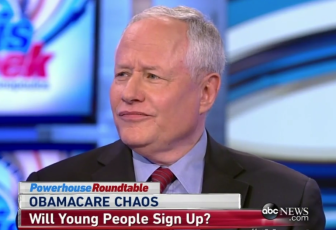 “The president promised explicitly—we heard it on this program—if you like the coverage you have now you can keep it, period. These hundreds of thousands of people evidently like the policies they had, because they kept paying for them.”

Guh-bwuh? This is part and parcel with a calcifying GOP narrative that the health insurance industry was doing just dandy until 2009, when President Error Message decided to muck it all up. That’s a fantasy world. Back in the days when people could be denied health insurance simply for needing it and an illness could bankrupt you, the fact that people purchased whatever desperately-needed insurance was available was in no way an endorsement of that insurance. People purchased what plans they could because they had to. The Humidor has a great baritone, but he’s singing to himself on this one.

Point That Really Needed to be Made Award:

Jamelle Bouie, on Reliable Sources: “I don’t think firing Sebelius actually gets you anything fixed with HealthCare.gov.” Somebody had to say it!