Mediaite’s Sunday Show Round-Up: ‘We Won, Who Cares How?’ Edition 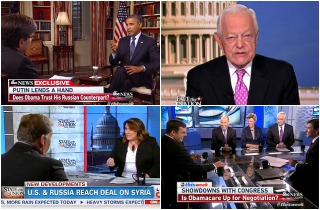 Never fear, Mediaiter, we’ve got everything that happened while you rested up for boozy brunch.

We Won, Who Cares How?

If there were a consensus of the day, it’s that the deal brokered among the U.S., Russia, and Syria—if it works, and who knows if it will—was a victory, provided you don’t pay attention to how it was achieved. Given that the Obama administration’s sustained improv included John Kerry saying “I want Assad to give up his weapons, and while we’re at it, I’ll take a pony”—to which Russia said, “You want pony? We can get pony”—the process leading to a diplomatic resolution was not pretty. But at the end of the day, no boots hit the ground, America was not drawn into another Middle Eastern conflict, and nobody, civilian or soldier, was on the receiving end of an American missile.

Not everybody agreed. House Intelligence Committee Chairman Mike Rogers and CNN analyst S.E. Cupp warned of Russia and Hezbollah gaining from the agreement, respectively, and Jeffrey Goldberg said that by making a deal with Bashar al-Assad, the U.S. ensured he would remain in power.

…But Is Obama Washed Up?

Given that the Obama administration was headed for a likely defeat in the House of Representatives over the Syria vote, if not in the Democratic-controlled Senate as well, many wondered aloud of Obama had already entered the lame duck period of his presidency. In fact, George Stephanopoulos wondered aloud while sitting across from Obama. It was awkward:

Obama reminded Stephanopoulos that his policies, especially immigration reform and gun control, had popular support, and that the former could become law if the House GOP would only release its vice grip on the legislative process.

Later in the program, former Bush strategist Matthew Dowd let 44 have it, diagnosing Obama with such an advanced case of Bush-itis you’d swear a hurricane had hit New Orleans. “He’s on the road to irrelevancy,” Dowd said.

Obama, in response to criticism of his fumbling of the Syrian crisis: “Had we rolled out something that was very smooth and disciplined and linear, they would have graded it well, even if it was a disastrous policy. We know that because that’s exactly how they graded the Iraq War.” Not a bad third quarter pass.

Best Spontaneous Break Down of Credulity After Something Ridiculous Was Uttered

Justin Amash cracked up an entire ABC panel when he said that the House would be doing Obama a “favor” by delaying Obamacare via a showdown over the debt ceiling. He seemed genuinely confused as to why the entire table, even Dowd, burst out laughing.