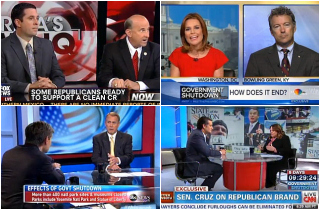 What Did I Miss?

We’re gonna default! As the gummiment shutdown eeks closer to the October 17 debt ceiling deadline, more and more lawmakers are contemplating combining the two into one ginormous bomb that will go off if unless very, very delicately handled. And then we’re gonna give it to the House GOP!

Saddest Puppy Eyes in the Whole World John Boehner (R-OH) seems resigned to the whole thing. He always wanted to have the fight over the debt ceiling—which is not the same thing as wanting to default—because he knew that a government shutdown would be bad for the GOP (and it is). But you don’t get to pick your caucuses.

Speaking of which, the most telling moment of the day came right here:

“The debt ceiling historically has been among the best leverage that Congress has to rein in the executive,” Cruz replied. “There’s great historical precedent. Since 1978 we’ve raised the debt ceiling fifty-five times. A majority of those times, twenty-eight times, Congress has attached very specific and stringent requirements, many of the most significant spending restraints, things like Gramm Rudman [i.e. the Gramm-Rudman-Hollings Balanced Budget Act], things like sequestration, came through the debt ceiling.”

Catch that? Our Man in Washington Ted Cruz thinks the sequester is an example of good legislation. To the bunkers:

David Gregory. Savannah Guthrie filled in on NBC’s Meet the Press, and did a bang-up job with professional sophist Rand Paul. After several minutes of Paul pulling the Obama-refuses-to-negotiate rabbit out of his hat, an exasperated Guthrie finally asked, “Why is it even a matter of negotiation?” Several seconds of Paul Silence followed—I can order that on Amazon Prime, right?—and then Paul basically said, “Because I wanna.” It’s more than Gregory would have gotten out of him.

…and the 2013 Louie Gohmert Word Scramble Award goes to:

Louie Gohmert! (What are the odds?)

Gohmert (R-TX) was seated next to colleague Devin Nunez (R-CA), who looked like he’d been set up on a blind date with a tweaking cactus. Nunez quietly called Gohmert dumb for pushing the defund-ObamaCare strategy; Gohmert nodded along vigorously. Then this: “I think it’s tragic you have a United States president who says when a bill is voted by both houses and I sign it and it bears my name, and the Supreme Court doesn’t overturn it, then it’s the law and we’re not changing it,” Gohmert said. “I’ve never heard a president say that before!” And he still hasn’t.