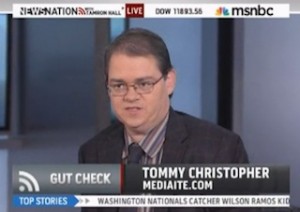 Amidst the breathless reporting on the reprehensible child rape scandal surrounding the Penn State college football program, many reporters in the media have used a certain shorthand to discuss the alleged crimes of former Defensive Coordinator Jerry Sandusky. The consistent use of the phrase “sex scandal” to describe such abhorrent criminal behavior caught the ear of Mediaite’s Tommy Christopher, who penned a column yesterday that called out the media’s lazy and incorrect labeling of a rape scandal. On Thursday he visited with MSNBC’s Tamron Hall to discuss his story.

Christopher rightfully reminding viewers that “the language that surrounds these things greatly affects the way people think about them” adding that incorrect descriptors do a disservice by keeping people from taking them seriously. The essence of Christopher’s point was described by his research efforts described in his column yesterday:

The media’s treatment of this crime against humanity adds insult to injury. This is nothing new, of course. The nomenclature surrounding “sex crimes” is already hopelessly sterile, and the media routinely refers to cases of rape and sexual assault as “sex scandals,” but that makes it no less important to call them out every time they do it.

Sandusky is not accused of “having sex” with little boys, he is accused of raping them. In our civilization, “sex” with a child is not possible, since a child cannot consent to sex. As I half-listened to the news all day today, then, and I heard repeated references to “the Penn State sex scandal,” it pissed me off. It made my blood steam a little bit, like a hot cup of coffee.

What made my blood boil was a quick search of the term “Penn State sex scandal” on the TV Eyes transcription database, which revealed 3,591 instances of the phrase…since yesterday.

I asked Tommy how he felt about his column and he graciously pointed out that he didn’t necessarily deserve credit for “pointing out something so obvious.” He then added “one of the great things about writing for Mediaite is that I can write something that says ‘Dear Media,’ and the media actually listens.” Please read the entire column after watching Christopher’s appearance below, courtesy of MSNBC: