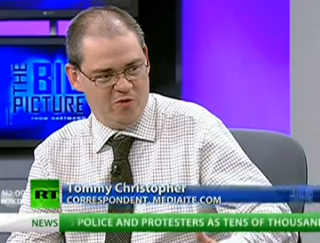 The political world is still reeling from the intense Congressional debate that pushed America to the brink of default, and trying to find just who to blame to make sure it doesn’t happen again. On last night’s The Big Picture, Mediaite’s Tommy Christopher took on the subject with host Thom Hartmann, arguing that the Democrats were “cute” in their naivete and could never pull off such a stunt because, with Republicans, “there’s nothing you can threaten them with.”

Hartmann noted that the impending crisis was at least predictable enough for the President to have been confronted with a question from National Journal’s Marc Ambinder that detailed exactly how Republicans could have exerted their leverage in the debt ceiling debate to cause a stir, and yet the Democrats seem to have been taken by surprised. “It’s hilarious,” Christopher noted wryly. “Democrats are so cute. They remind me of the heroes in pro wrestling who are always perpetually shocked that the referees are not enforcing the no bicycle chain rule.” That said, he ceded that he thought both Speaker John Boehner and the President “got taken by surprise” by the intensity of the Tea Party contingent in Congress, something for which Christopher noted that he could “sort of sympathize” with Speaker Boehner, because the idea of allowing the United States to default was that hard to believe.

Hartmann also asked about a question Christopher posed to White House Press Secretary Jay Carney on what is and isn’t appropriate rhetoric by public officials, in which Carney argued that “lowering the temperature in general is a good thing.” “Isn’t this part of the problem?” Hartmann asked, to which Christopher answered that he did believe “the President is already cool enough” without having to tone it down even more.

As for the next problem on the horizon, Hartmann posited that the gas tax hike that mostly faces no opposition when it is routinely raised in Congress will be the next frontier. Christopher noted that the President had “handled this issue very well during the 2008 campaign, but that was a different Barack Obama.” Not to mention that he didn’t believe the sort of situation Republicans created could be mimicked on the left. “This is not the kind of thing that Democrats can ever do,” he argued, “If we threaten not to increase the debt ceiling, the Republicans will say ‘Okay, sure! Let’s go!'” This, he added, was not just a problem with the nature of Republicans, but with Democrats. “They know the Democrats will cave in, because they do every time.”