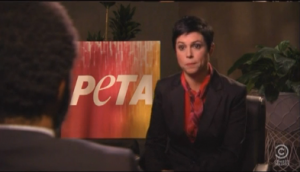 PETA, everyone’s favorite animal rights group, is launching a new initiative to bring attention to the plight of enslaved and exploited celebrity sea mammals, and The Daily Show‘s Wyatt Cenac is totally on board. The group has filed a lawsuit against SeaWorld on behalf of five plaintiffs — Tiilikum, Katina, Corky, Kasatka and Ulises — accusing the water park of holding the orcas as slaves and arguing that they should be freed under the 13th Amendment.

You know, just like black slaves were freed from slavery here in the U.S. under the 13th Amendment. In fact, the whole situation reminds Cenac of the old orca spiritual. You know the one: “UUUUoooorrruouououopupipiiioooorrrgh!”

Civil rights activist Elaine Brown has called PETA’s actions racist. “If there is animal cruelty,” she said of the situation, “we want to talk about checking animal cruelty. But animal cruelty does not rise to slavery. Part of the slave condition was that blacks were not really [considered] human beings.”

PETA’s strategy is to point out to the court that the 13th Amendment makes no reference to “people” or “person” in writing and, as such, could also apply to animals. Which is brilliant, as Cenac notes, because it’s not like the Constitution includes any sort of language to indicate that, you know, it only applies to We the People.

Cenac did point out that PETA’s senior VP of communications Lisa Lange isn’t free from criticism either. She keeps a dog as a pet. On a leash. In her home. Can you imagine? “So,” Cenac asked, attempting to make sense of this injustice, “orcas are like the field niggers, and dogs and cats are the house niggers.” And he did what any compassionate, right-thinking freedom fighter would do and, through his lawyer, served Lange a lawsuit on behalf of the animals PETA is exploiting without consent or pay in their campaigns.

Check it out, from Comedy Central: