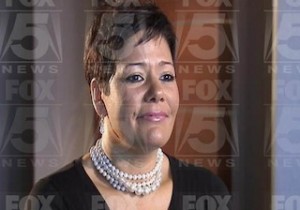 Well, maybe this story will get Herman Cain back in the good graces of GOP primary voters and potential donors — it appeared to work in the past. A third woman has come forth and alleged that she engaged in a 13 year consensual relationship with the former Godfather CEO. Her name is Ginger White, and she appears to be based in Atlanta, Georgia. To be clear, this is not an accusation of harassment, but rather an alleged long-term affair.

Atlanta’s Fox 5 is sitting on an interview between Ginger White and Dale Russell that they intend to broadcast at 6pm this evening. The Fox 5 Atlanta website has teased portion of the report, which features the following comment from White:

“It was pretty simple,” White said. “It wasn’t complicated. I was aware that he was married. And I was also aware I was involved in a very inappropriate situation, relationship.”

Rather, this appears to be an accusation of private, alleged consensual conduct between adults – a subject matter which is not a proper subject of inquiry by the media or the public. No individual, whether a private citizen, a candidate for public office or a public official, should be questioned about his or her private sexual life. The public’s right to know and the media’s right to report has boundaries and most certainly those boundaries end outside of one’s bedroom door.

Mr. Cain has alerted his wife to this new accusation and discussed it with her. He has no obligation to discuss these types of accusations publicly with the media and he will not do so even if his principled position is viewed unfavorably by members of the media.”

Cain broke news of this potentially explosive story himself during an earlier appearance on CNN. What’s most noteworthy about this story thus far is that this isn’t an issue of inappropriate behavior, but rather a mutually consensual relationship with a married man. During the interview, Cain flatly denied that he was in a 13-year affair, though he did acknowledge that he knew her at this time.