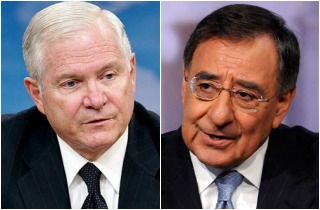 Former Secretaries of Defense Robert Gates and Leon Panetta both criticized President Barack Obama’s Syria policy at an forum at Southern Methodist University on Tuesday night, arguing that Obama had not supported the Syrian rebels fiercely enough, and that he should not have gone to Congress for authorization to strike.

“Boy, did they open up,” host David Gergen said to CNN’s Wolf Blitzer on Wednesday afternoon. “Even in their loyalty, and they remain loyal to the President, they have sharply different views on how this should have been handled. Neither would have drawn a red line, for starters. Neither would have gone to Congress once a red line was drawn. They both felt he should have done it, acted unilaterally or whatever. Both would have armed the rebels much more aggressively.”

“When the President of the United States draws a red line, the credibility of this country is dependent on him backing up his word,” Panetta said, adding he would not have advised Obama to go to Congress: “Mr. President, this Congress has a hard time agreeing as to what the time of day is.”

When Gergen asked if he would trust Russian President Vladimir Putin, with whom Obama struck a deal for the dismantling of Assad’s chemical weapons stockpiles, Gates said, “Are you kidding me?”

For all that, the two foreign policy figures disagreed over whether the U.S. should have gone through with military strikes. Panetta felt that not punishing Assad would embolden Iran to pursue its nuclear weapons program, while Gates, a Bush appointee, said such action would be like “throwing gasoline on an extremely complex fire in the Middle East,” and that recent commanders in chief “have become too quick to reach for a gun to solve an international problem.”

“I believe to blow a bunch of stuff up over a couple of days to underscore or validate a point or principle is not a strategy,” Gates said.

“One has to wonder, had they been there at his side when these decisions were made, would we have come out in a very different place?” Gergen said. “I think we would.”