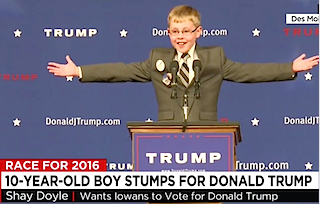 Ever wonder what kind of person would actually support a Donald Trump presidential campaign? Well, now you have your answer in the form of Iowa fifth grader Shay Doyle, who went on CNN Wednesday to explain why he calls Trump his “idol.”

Following Trump’s big announcement, the 10-year-old Doyle did the honors of introducing the candidate at his first big event in Des Moines. “I think that he’s one of those people, instead of going out and telling everyone what he will do, he’ll just go and do it,” he told the crowd before Trump took the stage.

When CNN’s Brooke Baldwin called Doyle “such a little stud” during their interview earlier this afternoon, he simply sighed and replied, “I get that a lot.”

Doyle, who first encountered Trump by watching his NBC reality show The Apprentice, described him as a “really good guy” with a “great personality.”

“So I started watching him, and then I started studying him, and then he quickly became my idol,” Doyle continued. When they finally got to meet earlier this year, Trump gave him the advice, “Do what you love and you will be happy.”

In response, Doyle had his own piece of advice for Trump, who has been facing increased criticism over the last 24 hours: “Don’t take it personally.”

As of Tuesday night, Doyle has officially rebranded himself as @mrkidtrump on Twitter and already has more than 40 followers.

A successful night! Thankful to be a part of it! @realDonaldTrump #MakeAmericaGreatAgain pic.twitter.com/YiKK5pyOT6

But will his dedication to all things Trump extend into his later adolescence? Or will he end up like former GOP child star Jonathan Krohn who ultimately grew out of his conservatism after speaking at CPAC when he was just 13 years old? Only time will tell.