A Florida man and his family were booted from Disney World after a poorly-timed meth joke that resulted in a drug raid and a lifetime ban.

David Swindler and his family, who reside in St. Augustine, were staying at the Pop Century resort at Disney World over the Labor Day weekend. When he tried to extend his two-night reservation, Swindler grew impatient with an employee and uttered a rather interesting joke — that he could build a meth lab in his room before he was able to get any service.

Needless to say, the remark didn’t go over so well with the fine folks at Disney.

“I accept responsibility for saying that, don’t know where it came from,” he told First Coast News. “Don’t know why I said meth lab, I should have said, ‘I was going to build an atomic bomb,’ or something else. I didn’t think anyone would take me seriously.”

Not only did the resort staff take Swindler’s comment seriously, but so too did Disney security and the Orange County Sheriff’s Office. They raided Swindler’s room and, after finding no evidence of a meth lab, kick him and his family off the premises.

To add insult to injury, Swindler was issued an official trespass order from Disney World, effectively banning him for life from ever stepping foot on the park grounds. He can appeal the ban with Disney security, but has yet to do so.

Regardless, the lifelong Disney fan asserts that the incident “has not taken away my love for Disney.”

Then again, considering who he somewhat shares a likeness with, perhaps the Pop Century resort staff’s reaction wasn’t that extreme: 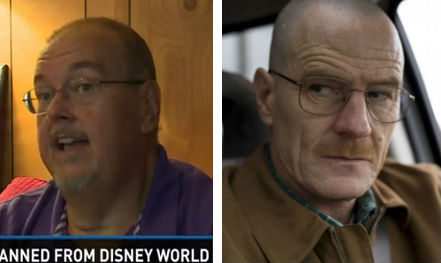 Check out the clip below, via First Coast News: