When he answered Mediaite’s phone call last Friday, Latino activist Roberto Lovato was smiling somewhere in Greenville, North Carolina, listening to his favorite song, “Viva la Música” by Ray Barretto, while getting ready to go to a party – one of the many parties he would attend in the next days celebrating the resignation of Lou Dobbs.

Lovato is the co-founder of Presente.org, a grassroots-meets-online organization for the advancement of Latinos, responsible for Basta Dobbs, the most notorious of the Latino grassroots organizations that demanded the firing of the anchor. The activists accused Dobbs of fueling anti-immigrant extremism, and CNN of double standard for profiting from hatred against Latinos while courting them with Latino talent and Latino-oriented programming. 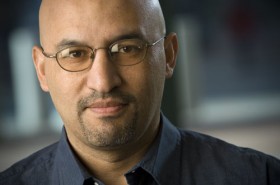 Main points of contention for the campaign were Dobbs’ false assertions that illegal immigrants had caused an exponential rise in leprosy, and that this group also constituted one-third of the prisoners in federal jails. The Latino tide against Dobbs gained strength this year after a series of hate crimes in New York City and Long Island was attributed by activists to the anti-immigrant rhetoric of which he was the most visible face. The spark that finally lit the fire was the commentator’s participation in the “Hold Their Feet to the Fire” rally in September in Washington, DC. The event was organized by the Federation for American Immigration Reform (FAIR), considered by some to be a hate group.

“We knew that CNN was divided by Lou Dobbs…We made a strategic decision to help the forces of good inside CNN.”

When the campaign against Dobbs was gaining momentum, CNN aired the four-hour documentary “Latino in America,” the most ambitious attempt by a network to date of painting the mosaic of the Latino experience. To many, this was a point of no return for the network: it was either for or against Latinos. According to its organizers, Basta Dobbs and other efforts gathered almost 150,000 signatures in less than two months. 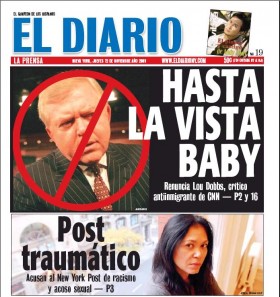 As everybody knows by now, Dobbs resigned on air on Wednesday November 11, attributing his decision to the “winds of change” that had “begun buffeting this country,” while promising to engage in “constructive problem solving.” No specific mention of the Latino campaign against him was made. Dobbs’ resignation simply stated that he had “talked extensively” with Jon Klein, president of CNN/U.S., over the last months and that he had agreed to release him from his contract.

The following day, Klein gave interviews to NPR and the New York Times, saying that the decision was made after conversations held since the beginning of the year “about the overall positioning of the network and the need for him to remove opinion from his show.” Klein expressly denied that the move had been influenced by the Latino groups, even when he acknowledged meeting with Alex Nogales, of the National Hispanic Media Coalition, to discuss the controversy over Dobbs. According to him, it was a “routine meeting” of which Nogales came out “unsatisfied” and with no promises on his part. (Mr. Nogales did not return phone calls to comment on the meeting for this article.)

But the Latino activists disagree with this official version of Dobbs’ exit. They say they are aware it happened in part because of CNN’s drop in ratings and a change in the course of the network. That doesn’t diminish the fact, they say, that Mr. Klein knew he had a major problem in his hands with Mr. Dobbs opinions, and was facing an uphill battle against them. The movement, Lovato argues, was already spreading over Latin America to target CNN en Español, while here in the country they were ready to boycott the advertisers of the network. Here, he gives us his take on Dobbs sudden exit, CNN’s decision-making process and what it all says about Latino clout in this country.

>>>NEXT: Interview With Roberto Lovato: “You can’t have it both ways, CNN.”