Tom Brokaw On Boston Suspect: ‘He’s Also A Muslim. The Fact Is That Islamic Rage Is Still Out There’ 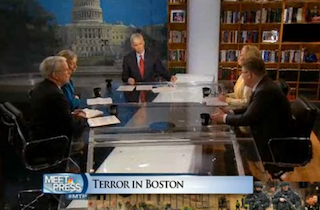 “This is a reality show that we’re going to be living with for a long time,” Tom Brokaw said on Meet the Press this morning, during David Gregory‘s panel on the attack in Boston. Discussing the need to find the motivation behind such events, the panelists further debated the pros and cons of the extra-vigilant era we’re entering.

“You can’t get intel on the lone operators,” Brokaw elaborated, noting details about the suspect, adding, “He’s also a Muslim. The fact is, that Islamic rage is still out there.” He then turned toward the security aspect, mentioning the phrase we’ve seen plastered on many a poster: See something, say something. That means, he said, if you do something, someone will see it. “There is no privacy left in our society,” he asserted.

Jeffrey Goldberg argued that we’re entering “the era of the suspicious package” — explaining that people now have responses to what they see in ways they did not before. Gregory later pointed to a Boston Globe columnist’s remark about never quite being able to feel safe in the city again. Doris Kearns Goodwin didn’t quite agree, concurring with Peggy Noonan that these incidents also bring out the best in us, our sense of community.

To that end, Goldberg offered an anecdote to illustrate resilience — and defiance:

“I was in Jerusalem about 10 years ago. There was a suicide bombing in a café one evening. Seven people killed. The next day I went back to cover the aftermath of the scene, the cafe was open and not only was it open, it was filled with people who were defiantly drinking coffee because they were saying you can try to kill me, but I will still go to my cafe and drink coffee.”

The panel agreed that the Boston marathon will continue and the city will get up and keep going, which is the best response. In the end, Brokaw came back to stressing the importance of finding the motivation behind such attacks. We must look at the roots, he said, which includes the Islamic world but which also includes the “rage against what they see in that part of the world as a presumptuousness of the United States.”