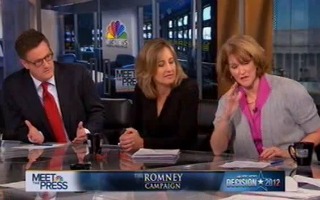 On Sunday’s Meet the Press, MSNBC host Joe Scarborough and Republican strategist Bay Buchanan engaged in a heated shouting match over the political impact of Mitt Romney’s 47 percent comments and whether they represented a legitimate political liability or if the media was overhyping their impact.

New York Times columnist David Brooks expressed regret over Romney’s comments because he says that the GOP nominee’s life story is highly conducive to a successful pitch for compassionate conservatism.

Scarborough says that the video shows that Romney neither understand nor believes in the fiscal conservative philosophy of a rising tide that lifts all boats. He said that someone like former British Prime Minister Margret Thatcher, who came from humble origins, would have never said what Romney said.

Scarborough took offense at the suggestion that he was not as much a conservative as Buchanan and challenged her statement. “I’m also with the Wall Street Journal editorial page, I’m also with every conservative – I’m with Rush,” said Scarborough. “You name the conservative; they have my concern, Bay.”

“These are political talking points,” protested David Gregory. He showed a recent Pew Center survey which showed Romney had the highest unfavorability rating of any candidate for president going back to 1988.

“It’s because of the way in which he’s been falsely interpreted – deliberately, I might add,” Buchanan fired back. “

Crosstalk ensued as Scarborough argued with Buchanan’s characterization of the coverage of Romney’s 47 percent remark. “Whose side are you on,” Buchanan asked Scarborough.

“If you want to blame the media for Mitt Romney’s inept campaign – Peggy Noonan said it best: This is a nightmare of a campaign,” said Scarborough.