Meet The Press Panelist: ‘How Does Mitt Romney Differ From George Bush?’
video

Meet The Press Panelist: ‘How Does Mitt Romney Differ From George Bush?’ 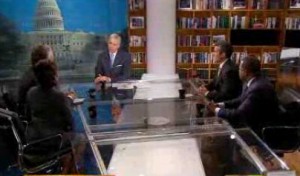 A wave of nostalgia has been wafting through the United States like a gentle breeze ever since George W. Bush made an ever-so-brief return to the White House to unveil his portrait. His name was thrown out there a few times on the Sunday morning shows today, and on Meet the Press, panelist Neera Tanden asked exactly how Mitt Romney and his economic policies are that different from Bush’s.

Tanden pointed to Romney’s endorsement of the Paul Ryan budget and the cuts it would make to entitlements like Medicare. She argued it is, in fact, to the right of anything Bush ever supported. Republican strategist Kevin Madden interrupted to insist this is a race that comes down to Obama and Romney, and Bush is not a part of the election. Alex Castellanos turned the tables and suggested the bigger split-party issue is with the Democrats and how Bill Clinton handled a rough economy compared to how President Obama is handling it.

David Gregory, however, did want to pursue the Bush connection (sidenote: this is the only time you will ever see the phrase “bush connection” in a non-dirty context) and put forth the idea that Romney needs to somehow set himself as an entity separate from his political party.

“He does have to create distance from a Republican party that is in trouble. He has to… create new opportunities for the fact that there’s a coalition of the young, Hispanics, and women who he has a severe disadvantage with. And he has to do it with this vision for the economy rather than ‘How’s it going for the other guy?’, which is basically what his message has been so far.”