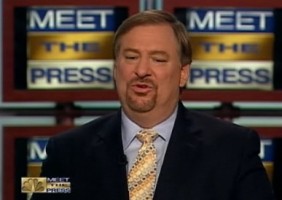 Ah, to be Rev. Rick Warren on a “very special” Thanksgiving Meet the Press.  Despite being connected to a Ugandan minister who supports the death penalty for gays, you don’t get asked about it — not even in a follow-up to the interview that occurred weeks earlier — and you aren’t pressed to explain your “I’m not a politician” position while calling abortion a “holocaust” and discussing your public position in opposing same-sex marriage in California.

The most heated questioning — if you could call it that — came when David Gregory asked Warren to explain his role in supporting Proposition 8 in California, which outlawed same-sex marriage.  After Warren went into a “loaves and fishes” tangent to deflect the question, Gregory pushed harder.

MR. GREGORY:  Just sticking with that topic for just a moment.  If the issue of legalizing gay marriage comes up again…

MR. GREGORY:  …on the ballot in California…

MR. GREGORY:  …would you work to fight that?

MR. WARREN:  You know, my position on gay marriage is very clear and it hasn’t changed.  What I do believe in is that it is my job to love everybody, no doubt about it.

MR. GREGORY:  So you would fight it?

MR. WARREN:  Well, again, I’m not a politician.  I didn’t fight it in the last issue.  What was misunderstood is people, people on both sides tried to make me the campaign leader.  I only mentioned it one time, and I mentioned it to my own congregation when I was asked, “What is our position on this?” and I made a video for our congregation.  Well, that was dumb, because it immediately went everywhere and then all the sudden it looked like I was the big campaigner.  And–but I wasn’t.  Of course I have a position on it.  As a pastor, I happen to believe what the Bible says.  But I also believe that I understand the pain that people feel from rejection.  So I care about both angles.

But back to the unasked questions about Uganda. Andrew Sullivan has called Warren the “Silent Enabler Of Hatred” for backing Martin Ssempe, who has authored Uganda’s Anti-Homosexuality Bill of 2009.  Newsweek’s Lisa Miller quotes Warren as saying “[t]he fundamental dignity of every person, our right to be free, and the freedom to make moral choices are gifts endowed by God, our creator. However, it is not my personal calling as a pastor in America to comment or interfere in the political process of other nations.”

So why no Uganda questions from Gregory?  You have the heir to Billy Graham’s bully pulpit on your show for over 20 minutes, and not a single question about why he works with leaders in Uganda who support the death penalty for gay people as part of AIDS reduction efforts?