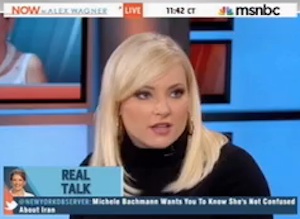 MSNBC contributor Meghan McCain interviewed Michele Bachmann and spoke glowingly about the Republican presidential candidate on Thursday’s edition of Now with Alex Wagner. “I famously said a statement earlier where I said Michele Bachmann was the poor man’s Sarah Palin,” McCain recalled. “I am completely wrong. This is the thinking man’s Sarah Palin.” When questioned by Newsweek‘s Richard Wolffe about why, McCain replied “she’s more smarter.”

“I connected with her,” McCain added. “I didn’t know what to expect and I’m a person who has been around politicians my entire life. I connected to this woman and I thought, this is what she should be doing, talking about being a mother and on foreign policy things. I don’t understand why this woman I met yesterday hasn’t been coming across. That’s the thing I don’t understand. I don’t think her campaign has done her a service. I loved her.”

“What’s interesting about Bachmann is her religion and her faith are important to her,” Wagner observed. “If we look at the GOP field, indiscretions and sort of sexual liaisons have been in the news.”

“I did bring it up, and as a Republican woman, character is how I vote for someone.” McCain opined. “Is Newt Gingrich’s indiscretions and the possibility of Herman Cain having a 13-year affair, does this matter to you? She answered politically and referenced her founding fathers.”

“Isn’t that an indictment of the rest of the field, is it not?” Wagner observed.

Later in the interview, Bachmann revealed she was never asked to the prom.

“I wasn’t invited to senior prom either,” McCain exclaimed. “So I was like, girls kick ass later on in life!”

Watch McCain gush about Bachmann below via MSNBC: