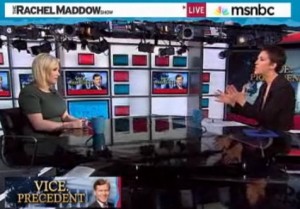 On Tuesday night’s The Rachel Maddow Show, host Rachel Maddow discussed the vice-presidential ambitions of Vagina Governor Bob McDonnell (see what I did there?), and delved into some of the loonier aspects of his past (and present) socially conservative positions. Meghan McCain then joined in to assess the effect of Virginia’s proposed mandatory ultrasound law, which she said would “penetrate beyond politics” and make McDonnell a “toxic candidate.”

While McDonnell is now showing signs that he’s backtracking on the mandatory ultrasound law, likely due to Monday’s highly effective silent protest, general election voters (especially women) aren’t likely to forget that he and his Republican legislature tried to force women seeking abortions to undergo medically unnecessary vaginal probes. As it turns out, McDonnell’s support for that heinous (and still possible) measure is just the tip of the ultrasound probe.

Maddow went over the college thesis that McDonnell wrote at age 34, as a student at Pat Robertson‘s Regent University, which takes stands against everything from homosexuality (natch) to cohabitation, and takes the position that it is the government’s role to “restrain, punish and deter” such behavior. McDonnell repudiated much of this thesis when he ran for governor, but Maddow demonstrated how, once elected, McDonnell reverted to type.

She then brought in MSNBC contributor Meghan McCain to weigh in on McDonnell’s VP prospects, and how his vagina-governing ways might affect them. “You have progressive views on gay rights and stuff, but you’re anti-abortion, you are pro-life,” Maddow said.

“I’m not pro-vaginal probing,” McCain replied. “I feel like I have to go on television and delineate between the two things. I’m horrified by the bill as a woman, as a Republican woman, I’m horrified.”

McCain went on to call the ultrasound law “radioactive,” wondering why McDonnell would ever express support for such a measure.

“This year maybe it’s not radioactive,” Maddow said. “Maybe this is how you lobby to be vice president.”

Meg allowed that issues like the ultrasound law and contraception might play well with a certain set of Republican primary voters, but “when it comes to mainstream, more moderate Republicans, especially with independents, it’s radioactive.”

She later added that the ultrasound law has even caught the attention of less engaged voters. “Vaginal probing is something I had friends texting me about, (saying) ‘I’m not into politics, what does this say?’ This is something that will penetrate beyond politics, will make him a toxic candidate, and end his life-long dream of being a vice president.”

What Meghan McCain’s jealous, zealous critics always overlook is that, regardless of how she achieved her elevated profile, she is a valuable bellwether of young, moderate Republicans and independents. Many of the same conservative activists (political activists, not social activists) who deride McCain are the same ones who tell me, over drinks at CPAC, that they don’t really mind gay marriage, or they support sensible immigration reform, but dare not speak these positions for fear of excommunication. They resent Meghan McCain because she’s not George Will, but nobody is texting George Will in defense of their own vaginae.

If Meghan McCain is saying that Bob McDonnell’s Womb Raiders are energizing young women, who aren’t otherwise politically engaged, against the Republican Party, they would be wise to listen to her. Lucky for Democrats, they probably won’t.

Here’s the clip, from TRMS: