Meghan McCain On The View: Criticism Has Launched My Career
video

Meghan McCain On The View: Criticism Has Launched My Career 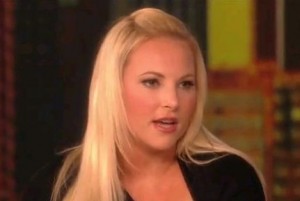 Well, things got a little chaotic on The View today when Meghan McCain showed up to promote her new book America, You Sexy Bitch, which she co-wrote with comedian Michael Ian Black and whose title her father John McCain thinks is “vulgar.” Despite the book’s fluffy title, McCain took advantage of her time on the show to hold forth on a variety of rather serious policy problems during her segment, hopscotching all over the political map.

According to McCain, it’s “scary” how partisan electoral politics are these days, and Mitt Romney’s perfect running mate is “Chris Christie — Tony Soprano, I love him!” McCain also argued that despite his courting of ultraconservative voters during the primary season, Romney is “smart enough to know he needs independents to win.”

She also touched briefly on the personal attacks she has weathered from critics on both sides of the aisle, but acknowledged that such criticism has “launched [her] career” and cheerfully invited her detractors to “kiss [her] fat ass.” Barbara Walters looked a little taken aback by that one.

The interview was far from over, however, as McCain held forth on decriminalization of marijuana (nobody is going anywhere when they’re high, Sherri Shepherd chimed in at this point. “Ain’t nobody getting hurt in a car smokin’ no weed.” …You’re the expert?) and legislation in favor of gay marriage, which she believes President Obama ought to present to Congress ASAP. You can see the whole whirlwind below, via ABC: