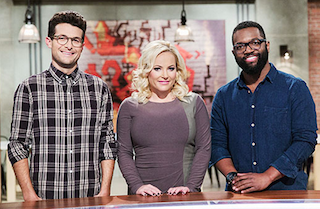 According to reports from TheWrap, TakePart Live, the Pivot channel’s nightly news show aimed at millennials and hosted by Meghan McCain, Jacob Soboroff and Baratunde Thurston has been canceled.

“We thank our hosts and producers, they are incredibly talented and we’re already in discussion to work with them in different ways so that they can continue to have a place on Pivot,” the company said in a statement about its decision to end the show.

TakePart Live premiered in August of 2013 as the flagship news show on Pivot TV, a new channel launched by Participant Media aimed at young adults. The move to cancel the show comes after the departure of former Pivot head Evan Shapiro, who left the company last month to join NBCUniversal as executive vice president of digital enterprises.

UPDATE — 7:00 p.m. ET: A source at the network tells Mediaite that the TakePart Live show was becoming too expensive to produce for a new cable network that has failed to draw many viewers, proving just how hard it is to get millennials to watch live television.

McCain tweeted this message about the news Monday evening:

.@TakePartLive will be missed, thank you Pivot for the amazing opportunity! And thank you @jacobsoboroff and @baratunde for the good times.

Sorry to say our last episode of @TakePartLive will be 12/18. Looking forward to riding into the, and then the next chapter!

And here’s how Thurston reacted: