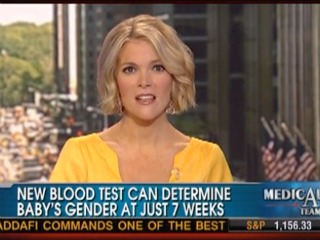 Fox News’ Megyn Kelly, who returned to work this week following her maternity leave, this afternoon tackled an ethical issue arising from a newly-developed blood test that allows parents and doctors to know the sex of a fetus at just seven weeks. Will this, Kelly wondered, possibly lead to a spike in abortions?

To discuss this and learn more about the blood test and how it works, Kelly brought on Fox News “medical A-team” contributor Dr. Marc Siegel. The test works, he explained, by picking up “the genes of the Y chromosome” as soon as seven weeks into a pregnancy, with an accuracy of about 90 to 95 percent. This is helpful for doctors, he said, because it allows them to test early on for sex-specific disorders like, say, hemophilia or muscular dystrophy.

Things become murky once parents decide that they either 1) do not want a child of a particular sex, or 2) do not want to raise a child with certain medical issues. As an example, Dr. Siegel pointed to China, where sex discrimination and selective birthing have resulted in boys far outnumbering little girls. He says he is very worried about the same thing happening here in the U.S… despite the fact that the U.S. does not have the same cultural attitudes towards sex, nor the “one-child policy” that China does.

Kelly pointed out that parents can already determine the sex of their child as early at 13 weeks (in other words, at the end of the first trimester). Would an additional six weeks, she wondered, have any real impact? Dr. Siegel responded that “much more likely, you’re going to see abuses happen at seven weeks:”

You’re passed the point where… I mean, even if you’re pro-choice, by the way, what’s the point of, you know, having a pregnancy and then just arbitrarily, based on sex, getting rid of it?

Are there, though, ethicals concern for the medical community where this blood test is concerned? Dr. Siegel continued:

I think there are. And I’m most comfortable when my patients want me to know, but they don’t necessarily want to know until maybe towards the end when they’re trying to figure out if it’s a blue nursery or a pink nursery.

In India, there’s a rampant problem with this going on. I mean, it’s a terrible thing. It could work in reserve. Someone could say, “I already have two boys, now it’s time for a girl. And until I get that girl, I’m going to keep aborting fetuses.” I mean, this could be a nightmare.

His opinion, basically is that “parents don’t have the right” to know a child’s sex early on in the birth because “you don’t get to choose the gender of your child.” (I have to point out that “gender” and “sex” are entirely different things and I strongly suspects he means sex in this case, not gender.)

When talk turned to Obamacare (reaching in to grab you with its tentacles), “mandated” birth control, and the idea that the government will decide which sex it would like your child to be, Kelly decided to take a step back. “Well, that’s a little out there, Dr. Siegel,” she said, laughing.

Unfortunately, their conversation did not touch upon the ethical implications of knowing that one’s child has a debilitating disease seven weeks into the pregnancy. And this is really is a shame because, quite frankly, U.S. parents choosing to terminate a pregnancy because they are dissatisfied with the sex of the fetus is probably, realistically not as likely to occur as parents choosing to abort a fetus with an untreatable or expensive or painful medical condition.

Take a look at the segment, courtesy of Fox News: