Megyn Kelly Admits To Shoplifting Past: ‘My Best Friend Made Me Do It!’ 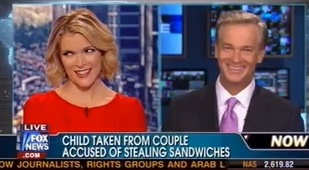 Megyn Kelly shared a charming tale of her youthful indiscretions on her Fox News program this afternoon, revealing that she was caught shoplifting at a Kmart when she was a teenager. “I have to tell you when I was 12 years old, I shoplifted,” Kelly admitted. Correspondent Trace Gallagher gasped, “What?!” “I got caught shoplifting at a Kmart…It was really my then-best friend that made me do it.” Kelly facetiously explained.

Kelly made the startling admission while discussing a couple’s shoplifting case that led to their daughter being taken to child protective services.

“We completely got busted by her mother who said, ‘Where did you get those huge star earrings and huge star plastic necklaces?'” Kelly detailed. “This was Halloween — and my friend said, Megyn’s mother bought them for us. She said I’m going to go call Mrs. Kelly. You two girls better go down to the basement and pray to God Mrs. Kelly said she had two pairs of the huge star plastic earrings and huge star plastic necklaces. We went down to the basement and prayed to God that my mother would lie for us — which of course she did not. The mother came down to the basement and said your father will be over to take you back to Kmart so you can confess after he finishes his meat loaf. And we did! We had to go down to the Kmart and confess our crime to the manager of the Kmart. He told us we could have been arrested! It was terrifying, and I tell you what, I never stole anything again. That was my life of crime.”

“Your dad was well justified in doing that, he’s a good dad,” Gallagher said.

“I’m reformed now, unlike Lindsay Lohan, I did my penance and I learned!” Kelly exclaimed.