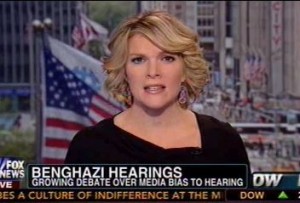 The mainstream media didn’t find Wednesday’s Benghazi hearing quite as “explosive” as Fox News predicted they would be. So today, Megyn Kelly and her guest, conservative Media Research Center VP Dan Gainor looked into why so many media outlets appeared to dismiss the testimony as nothing new.

Kelly showed Gainor some headlines from outlets like the Los Angeles Times, the San Francisco Chronicle, USA Today and others that she felt didn’t take the hearing quite as seriously as they should have. “If you look at, sort of across the mainstream media, it was a collective yawn in response to yesterday’s Benghazi coverage.”

Gainor said “this is a continuation” of the media’s “policy to minimize a scandal that makes Hillary Clinton look really bad,” essentially an effort to protect her before she runs for president in 2016. “The media have always loved Hillary.”

Like Greg Gutfeld said on Fox’s The Five last night, though with less colorful language, Kelly admonished the media’s decision to spend more time covering the Cleveland kidnapping case and the Jodi Arias murder trial than they did covering the hearing. She also suggested that the media is using the same tactics with its Benghazi coverage that Bill Clinton used to handle his extra-marital affairs: “dismiss the accusation as old news, attack the messenger, try to discredit the person leveling the accusation, cover up inconvenient truths.”

Another example of media bias on the Benghazi issue that got under Kelly skin was a tweet sent out by the Washington Post that claimed only “rich, middle-aged men and Chick-fil-A lovers” were using the #Benghazi hash tag. Kelly said when someone first told her about it, she thought, “there is no way this really happened,” and is now shocked that the Post hasn’t apologized.

“Does any of this matter?” Kelly asked. “If the the Washington Post, if The New York Times, if the LA Times, if the San Francisco Chronicle were reporting this in a way that didn’t dismiss these whistleblowers’ sworn testimony as a ‘yarn’ and ‘nothing to see here,’ would it make a difference with the American public?”

Gainor said it absolutely does matter, because all the media has to do is say the Benghazi aftermath was a product of “confusion” or “incompetence” rather than a “cover-up,” and “then you repeat it endlessly and the American public will believe it.”