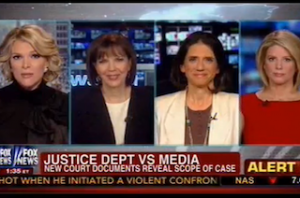 Megyn Kelly assembled an all-star panel of Fox contributors Wednesday to collectively take on the Obama administration’s Justice Department for targeting journalists like James Rosen and others with wiretaps and investigations. Kelly described the revelation that the DOJ had gone so far to seize Rosen’s parents’ phone records as “lunacy.”

Miller began by asking whether the Obama administration is “attempting to criminalize reporting itself,” an assertion she sees as justified about viewing the search warrant against Rosen. She added, “this is an extraordinary and radical interpretation of law.”

Rubin agreed, calling the Rosen case “dangerous” and “unprecedented.” She said “it is casting a spell, not only on the media but of course their sources. If the sources understand that every time they pick up a phone to talk to a journalist, their phone number will be traced and their conversation will be intercepted in some fashion, who would ever come to the media?”

Powers accused the Obama administration of being “contemptuous” from the beginning of “dissent and free media.” Tying the Rosen case to other instances when the DOJ has “created all kinds of legal theories to justify what they have done,” as in the issue of targeting American citizens with drones, Powers called the administration “completely unaccountable.”

After Miller pointed out, in defense of the administration, that cracking down on national security leaks in a post-9/11 world can be justified, Powers insisted that’s not what President Obama is up to. “The idea that the administration is pursuing leakers is actually not entirely accurate,” Powers stated. “What they pursue is whistleblowers. They pursue people who are calling the government out.” When so-called leaks benefit the president, she said, they are not pursued. “Is there a leak investigation into who leaked the information about the Osama bin Laden raid? I’m not aware of that.”

“I’m going to start to send emails to myself, from myself and CC Eric Holder,” Kelly concluded, “just so we can keep the record straight.”