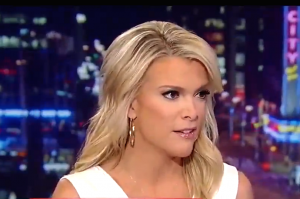 In case you haven’t heard, Megyn Kelly really, really wants to interview Hillary Clinton, and now that Clinton’s officially running for president, she may very well sit down in the lion’s den of Fox News.

But of all the people at Fox, Kelly made a strong argument that she should be the one to interview Clinton, and even went so far as to say she would do a better job of it than the big man himself, Bill O’Reilly.

“Bill, and I love him,” she said, “does macro, as he always says, and I’ll go micro. And she needs to be asked the specific questions. You need to be able to go ten layers deep with her, because that’s the only way you get answers.”

Judge Andrew Napolitano said Kelly does have the legal background O’Reilly doesn’t, but gave O’Reilly an edge on something else: he has the ability to “terrify” people.

Kelly said she would be fair to Clinton and not “terrify” her, but wondered that if Clinton comes to Fox, whether she would sit down with “somebody like me, who would press her.” Kelly did, however, end the segment by saying “it doesn’t have to be me.”

For the record, Clinton did do an interview on Fox News last year, with questions coming from both Bret Baier and Greta Van Susteren, and conservatives on Twitter were let down by how softball it appeared to be.