Megyn Kelly Calls Out Chris Christie Ally, But Asks ‘Why Do We Care’ if He Lied At Presser 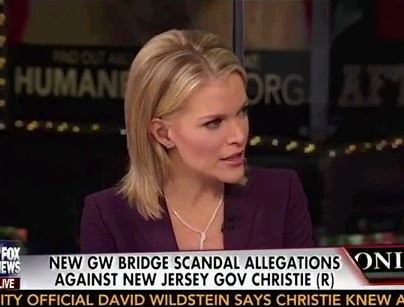 On Friday night’s The Kelly File, host Megyn Kelly parsed the breaking news in the Chris Christie Bridgegate scandal, expressing skepticism at the “breathless headlines,” while also calling out Christie surrogate Steve Lonegan for mischaracterizing what Christie said during his marathon press conference in January. Kelly pointed out that today’s revelations clearly contradict what Governor Christie said art that press conference, but also asked “Why do we care?”

The New York Times reported, Friday afternoon, that a letter from David Wildstein‘s attorney claims that “evidence exists as well tying Mr. Christie to having knowledge of the lane closures, during the period when the lanes were closed, contrary to what the governor stated publicly in a two-hour press conference.”

Christie’s office released a statement, in response, claiming that “Mr. Wildstein’s lawyer confirms what the Governor has said all along — he had absolutely no prior knowledge of the lane closures before they happened.”

In a panel segment following a news report on the developments, former Christie opponent Steve Lonegan tried to downplay the revelation, echoing the statement. “Megyn, the liberal media is looking for a bombshell, and they have a dud,” Lonegan said. “They are saying the Governor knew about the lane closures, well, surprise, everyone knew about it. He never denied that he knew the lanes were closed when they were closed.”

She also focused on the weak language of the lawyer’s revelation, which morphed, in the New York Times’ report, from Wildstein “ha(ving) the evidence to prove it” to “evidence exists tying Mr. Christie to having knowledge of the lane closures,” and wondered if that language merited such “breathless headlines.”

However, even when conceding the possibility that Christie lied at that press conference, Kelly wondered what the big deal would be. “As a lawyer, when I look at the language, I don’t see, what I see is somebody saying there is evidence tying him to having knowledge of the lane closures when the lanes were closed,” Kelly said. “Let’s assume that is true. Why do we care?”

Toward the end of the segment, Kelly also hung a lantern on the problem with Christie’s office’s statement. “This guy Wildstein, in his lawyer’s letter today, comes out and says I can prove, basically, that Christie knew about the lane closures when they were happening, contrary to what he said at his presser,” Kelly said. “And Christie comes out — you play the sound bite, and we played it for the viewers, he said I didn’t find out about it until it was over. That could be interpreted to mean when the lane closures were done. Christie comes out and doesn’t say I deny knowing about it when it was happening. He says I deny knowing about it prior to the lane closures. These guys are talking past each other.”

Here’s the clip, from The Kelly File: