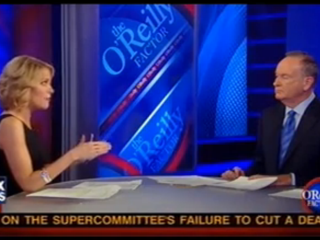 The shocking footage of UC Davis police officers pepper-spraying Occupy movement protesters made the rounds this weekend as some in the university call for the resignation of the school leaders involved. On tonight’s O’Reilly Factor, host Bill O’Reilly brought on Megyn Kelly to assess the legal situation beyond the images, and she noted that, shocking as the footage may be, the spray is perfectly legal, and arguing that the police used excessive force would be difficult.

The legality of pepper spray given its lack of toxicity– “it’s a food product, essentially,” Kelly noted– was “beside to point” to her, as she found the police to have acted in an “abrasive and intrusive” way against protesters who were engaging in behavior that was “very American, but it also happened to break the law.” Despite the fact that Kelly suggested there was a “moral discussion” to be had about the police action, she noted that, legally, there was little to be done. “I know the tape looks bad,” she told O’Reilly, “but from a legal standpoint, the cops didn’t do anything wrong.”

O’Reilly countered her apparent sympathy for the protesters by suggesting, “we don’t have a right to Monday morning quarterback the police,” adding that it was possible they could have felt threatened by the group– a claim made by an official at the school. Kelly appeared somewhat skeptical of the claim that the police could have been afraid of unarmed protesters and arguing instead that the official who claimed this was the case “just made something up” to defend her officers. Kelly’s conclusion, however, was a bleak one for the protesters– no matter how it looks, pepper spray is a permitted way to control unruly crowds.