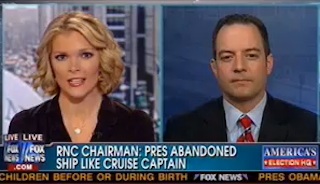 Republican National Committee chairman Reince Priebus appeared on Fox News’s America Live to respond to the growing furor over his comments comparing President Obama to Captain Francesco Schettino, the Italian captain of the Costa Concordia. Megyn Kelly asked Priebus if he stood by his comments, which he strongly defended as “clear.” “Clearly Megyn! When I made those comments, I clearly used the analogy in both sentences that this president was akin to leaving his own job and campaigning nonstop all the time,” Priebus exclaimed. “I think it’s pretty clear.”

“I made it very clear in the comments twice that what I was referring to — i didn’t just make the comment and move on. I made the comment that it was referring to leadership and acting like a leader in a moment of crisis. I was referring to the fact that this president is in love with campaigning and not in love with his job of getting our country back on track. I think it’s awful. I mean, people died, terrible and our prayers go out to those people without a question. But to take this comment and turn it into something that it is not, that’s wrong, too. That’s political gamesmanship.”

Kelly noted that Michael Steele and The White House has issued commented condemning him for his comments.

“The reality is the comment was crystal clear, couched twice with exactly what this was about, which is about leadership and learning about the rest our country that’s out of work instead your own job to get reelected 24/7. That issue was made clear. It will be about putting people back to work and the president has not risen to the occasion in a time of crisis.”

When pressed by Kelly over Steele’s criticism, Priebus responded, “I’m not going to get into that kind of engagement.”