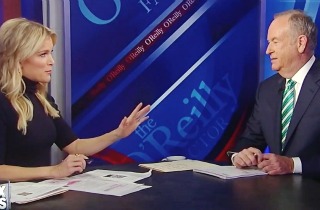 Bill O’Reilly was seriously pissed off tonight at NYC Mayor Bill de Blasio, so he was surprised when Megyn Kelly actually pushed back against him and defended de Blasio on one point.

At issue here was de Blasio’s decision to reappoint Criminal Court Judge Laura Johnson, who just weeks ago set no bail for an 18-year-old charged with making some pretty disturbing threats against the police on social media. Johnson also released another young man on bail late last month after he punched a cop.

Days before he reappointed her, de Blasio said in a statement that Johnson’s rulings were “in compliance with the letter of the state’s laws on bail,” citing risk of flight.

And Kelly actually agreed. O’Reilly said the purpose of bail is to keep bad people off the street, but Kelly corrected him and said in New York, the purpose of bail is to make sure people charged and arrested don’t flee. O’Reilly was incensed about the whole case being exemplary of de Blasio’s disdain for the police, but Kelly told him the situation is “not as egregious as you say.”

She said Judge Johnson likely assessed a low risk of flight and pointed out that de Blasio is actually supportive of a change in the law in how judges decide bail. Kelly told O’Reilly, “De Blasio’s got many problems, but I don’t see this judge’s reappointment as one of them.”