Megyn Kelly Explodes At Liberal Guest Over Benghazi Talking Points: ‘Come On! Can We Have Some Honesty?’
VIDEO

Megyn Kelly Explodes At Liberal Guest Over Benghazi Talking Points: ‘Come On! Can We Have Some Honesty?’ 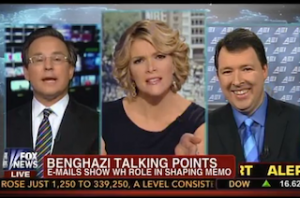 Fox News’ Megyn Kelly got into a contentious back and forth argument with Democratic strategist Simon Rosenberg Thursday afternoon over questions involving whether Obama administration officials deliberately misled the press and the American public on the Benghazi attack talking points. By the end of the segment, Kelly was uncharacteristically screaming at her guest to stop lying. “Come on, Simon!” she shouted. “Can we get some honesty?”

The discussion, which also included former George W. Bush speechwriter and conservative columnist Mark Thiessen, revolved around the recently-released emails from the White House that show just how the administration’s talking points were changed prior to U.N. ambassador Susan Rice‘s appearance on the Sunday talk shows.

Rosenberg immediately raised some ire in Kelly by suggesting that “we haven’t learned anything new” about the story in the last few weeks, suggesting that “we know that for several weeks afterwards the administration was confused about what happened” in Benghazi.

“No, they weren’t,” Kelly shot back. “We don’t know that.” On Press Secretary Jay Carney‘s assertion that only one word of the talking points were changed, Kelly added, “Maybe I’m just naive because I was still believing Jay Carney until I saw this evidence.”

When Rosenberg insisted that he didn’t think anyone in the administration purposefully misled anyone, Kelly raised her voice, asking, “You’re telling me Jay Carney was being truthful? He made a mistake twice in November and then again in May? Come on, Simon! It was not a mistake to say that it was only stylistic changes and only one word was changed. That’s not a mistake when we now know that the White House was the one meeting on this issue. Can we have some honesty? Wouldn’t it be so great?”