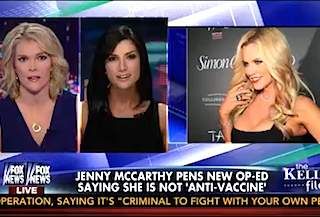 Fox’s Megyn Kelly was joined by contributor Dana Loesch Tuesday night to discuss the The View co-host Jenny McCarthy’s latest assertions that she’s not actually “anti-vaccine” as she claims the media has made her out to be. Kelly and Loesch, who both have young children, urged parents to listen to their pediatricians and not the celebrity host.

After playing a montage of McCarthy’s most strident anti-vaccine rhetoric, Kelly said it’s “shocking” to hear her talk about being “pro-vaccine” after all those statements she made in the past. Loesch agreed, saying she is “shocked” as well, especially after discussing the issue with McCarthy as a guest host on The View.

“Science is disputing this,” Loesch said. “This is a really serious issue. And, you know, Megyn you have little ones, I have kids as well. And I don’t like being looked at as though I’m a bad mother if I don’t believe whatever junk science comes out one day to the next about vaccinations. All I know is that when I have a question about vaccination schedules, I’m going to go to my pediatrician who has studied this.”

Kelly tried to give McCarthy the benefit of the doubt by playing some of the “context” she feels has been left out by the media, but at the same time lamented the “big influence” she appears to have on the culture. She said pediatricians have an increasingly hard time getting their message across when they have to compete with this “vivacious, beautiful, well-known celebrity holding up her child who has autism saying “‘I’m telling you the vaccine did it!'”

“If you care about the health of your child,” Loesch added, “go and investigate this further than just listening to what a celebrity says on it.”