Megyn Kelly Goes Off On Gosnell Attorney: ‘You Seem To Believe’ Convicted Murderer’s ‘A Swell Man’ 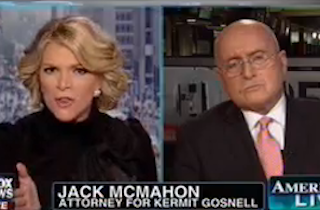 Megyn Kelly grew heated during a segment on Wednesday afternoon when she invited on Jack McMahon, the attorney for Kermit Gosnell, the abortion doctor convicted of murdering babies who were born alive following botched abortions. As McMahon denied many aspects of the case, Kelly went off on him for defending the doctor and praising his character.

From the outset, Kelly made sure to tell McMahon, “We don’t tar the attorney with the sins of the client.” She went on to question him about Gosnell being upset after hearing the life sentence verdict, given that “he wasn’t upset when he was aborting these babies and laughing how one child, one baby was big enough to walk him to the bus stop.”

McMahon argued that he had a human reaction and there was nothing “nefarious” to it. To that point, Kelly asked McMahon about his experience with Gosnell — and that was when things got heated, as McMahon described Gosnell as a “dream client” and “complete gentleman.”

Things got “out of hand” and “a bit awry,” he conceded — description that did not sit well with Kelly. “A bit awry?” she asked. “The testimony was the babies were born alive, were wriggling on the operating table, were crying. And he stuck scissors in the back of their neck.”

The attorney plainly stated that wasn’t true, which led to a back-and-forth between the two with Kelly questioning whether he was “disputing now that they were born alive as the jury found.” Gosnell was the number-one problem with the clinic, she charged as McMahon deemed that view “simplistic” (she countered with “factual”).

“That is all we need to know,” Kelly pressed. “He tried to abort them and failed and then he tried to kill them.” She went on to describe the poor conditions in the clinic and the different in the way he treated women based on their race — all of which McMahon denied.

Kelly grew increasingly heated as McMahon also disputed her remark that Gosnell was running a late-term abortion clinic. And the testimony about Gosnell’s joking isn’t true, he added. “Don’t sit around and start talking like he’s collecting body parts.”

“Jack, I started off by saying we don’t tar the lawyers with the sins of clients, and that’s true,” Kelly told him. “But listening to you, you sound like a guy who is suffering from Stockholm Syndrome. Because you seem to believe this is a swell man — notwithstanding the fact that he murdered little babies!”

McMahon denied that point as well.