Alan Dershowitz Slams Zimmerman Prosecutor: Her Affidavit ‘Is A Crime’ 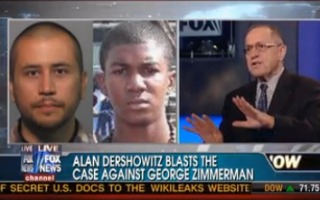 Lawyer, professor and political commentator Alan Dershowitz stopped by America Live Wednesday afternoon, where he shared his thoughts on the George Zimmerman case with host Megyn Kelly. In a nutshell: He thinks the case has gone to hell in a widely-publicized handbasket. Specifically, he believes that, if anyone should be tried in this case, it should be Special Prosecutor Angela Corey.

RELATED: CNN’s Toobin On Zimmerman Murder Charge: ‘She Threw The Book At Him’

“This affidavit,” he said, “submitted by the prosecutor in the Florida case is a crime. It’s a crime. If she in fact knew about ABC News’ pictures of the bloody head of Zimmerman and failed to include that in the affidavit, this affidavit is not the truth, the whole truth and nothing but the truth.”

He also took the prosecution to task for having used the passive voice — “a struggle ensued” — to describe the altercation that allegedly took place between Zimmerman and Trayvon Martin leading up to Trayvon’s death without adding pertinent evidence and details, such as whether Martin had been on top of Zimmerman, thus able to bash his head against the pavement as Zimmerman has claimed.

The prosecution’s goal, Dershowitz explained, is to present all the details and evidence of the case in order to pursue justice, not merely to seek justice solely for one side of the case. And “you don’t indict based on false information,” he told Kelly.

He reiterated that the case should focus on seeking justice, not necessarily on seeking “justice for Trayvon,” as the prosecutor has said. “Any reasonable judge,” he added, “would throw out second degree murder.”

So why might the prosecutor have “raised the stakes” to his level? Dershowitz has a theory: