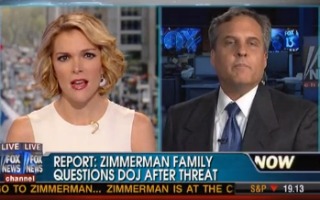 On Tuesday afternoon, Megyn Kelly about the reaction someone purporting to be a member of George Zimmerman‘s family has had in the wake of death threats and calls to action over Zimmerman’s shooting of Florida teen Trayvon Martin back in February. You may recall that, last last month, the New Black Panther Party distributed “Wanted: Dead Or Alive” leaflets for Zimmerman and offered a $10,000 bounty for the 28-year-old’s “capture.” Members have also, as a clip on America Live showed, called for “an eye for an eye” in the Martin shooting — rhetoric which goes directly against comments made by the Martin family’s attorney.

As we reported earlier, someone describing his or herself as a “concerned Zimmerman family member” wrote a letter to Attorney General Eric Holder — published by the Daily Caller — describing how “many in the black community have formed what many are calling a ‘lynch mob’” against Zimmerman.

But do any of the New Black Panthers’ actions constitute a crime? Kelly brought on criminal defense attorney Chip Merlon to discuss.

“In the state of Florida,” Merlin explained, “it’s wrong to solicit others to commit any type of threat against another,” making it much more likely that the group would be charged with a crime under state law as opposed to federal law. That said, he made sure to note that a call for justice in the form of asking for the arrest of Zimmerman doesn’t equal hateful speech.

Merlin also didn’t believe the call for a “life for a life” or an “eye for an eye” constituted a crime. “It’s free speech in this country,” he said, “and we’ve got to allow for that.” He did note that the $10,000 bounty poses a problem because, as he had mentioned before, one cannot solicit others to commit a crime in Florida, and the reward could be argued as an incentive inspiring others to take Zimmerman’s life. But, he cautioned, one has to look at the “the entirety” of the literature put out by the New Black Panthers on the matter.

“How would that be a defense?” Kelly asked. “If somebody goes out and shoots George Zimmerman, are they really going to be able to defend themselves by saying ‘look at the entirety of that flyer, your Honor’?”

“That’s something else. That’s somebody going out and killing George Zimmerman,” Merlin replied. “That’s clearly wrong. As a matter of fact, morally it would be wrong to even call for such a thing. Certainly Martin Luther King would never ask for there to be an eye for an eye, a tooth for a tooth because he wasn’t that way.” The entirety of the flyer, he continued, is a call for justice.

Kelly later cautioned that it has not been confirmed whether the letter writer is indeed a Zimmerman family member, or whether it was indeed sent to the DOJ.