Megyn Kelly Guest: Maher And The Left’s Views On Women Has Roots In ‘Old Soviet Union’ 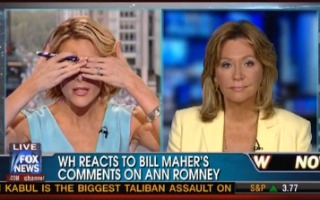 “What she meant to say, I think,” Maher told his viewers, “was that Ann Romney has never gotten her ass out of the house to work. No one’s denying that being a mother is a tough job; I remember I was a handful. Ok. But, you know, there is a big difference between being a mother and that tough job and getting your ass out the door at 7 a.m. and it’s cold… having to deal with a boss… being in a workplace where even if you’re unhappy, you can’t show it for eight hours. That is kind of a different kind of tough thing.”

Kelly’s guest Sandy Rios, the VP of Family-PAC Federal, was asked to weigh in on recent discussion on whether the Obama administration and his re-election campaign should work to distance themselves from Maher — whom, you’ll recall, is a major donor to the President’s re-election efforts.

Rios, for her part, felt that both Maher and Rosen are “expressing the deep sentiment of the left,” adding that the left is not a “friend” to women.

“You know, I said this on the show last week,” said Kelly. “Just the pitting of us against each other is just so unhelpful. Stay-at-home moms and working moms need to be rooting for each other and supporting each other. And we’re not; we’re not dividing against one another. It’s just Hilary Rosen who’s trying to divide us, and others who think likes she thinks.” Including, she added, Bill Maher. And for President Obama, she continued, calls for civility no longer seem to matter when it comes to Maher. The host placed her hands before her eyes and blinders to illustrate her point.

Rios compared Maher to a young, “mouthy” kid who has never been taken outside “to the woodshed.” She then declared that the left’s treatment of women has its roots in the Soviet Union, when women wore uniforms like men and perform the same work as men because there was “no difference between the genders.”