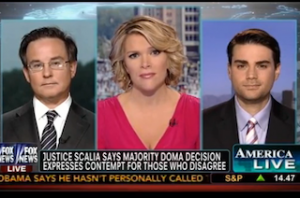 Rosenberg, on the other hand, said the court was simply using the “equal protection clause” to demonstrate that there was “discrimination going on against a class of Americans that is protected by the Constitution.” He noted the polling that shows “most Americans are comfortable with us moving in this direction and you will see many more states legalize gay marriage in the coming years.”

Shapiro couldn’t believe that “the left” was “celebrating” the decision from a “tyrannical Supreme Court that has decided to moralize from the bench.” He posed a hypothetical scenario in which Justice Antonin Scalia had used the Court to declare that “heterosexual marriage is a value and homosexual marriage is not.” Then, he said, “the left would be talking about a tyrannical Supreme Court overstepping the bounds of the Constitution.”

When Rosenberg brought of the Voting Rights Act decision that angered many on the left, Megyn Kelly noted that the Supreme Court has managed to “alienate everyone” this week. “That means they’re doing their job,” she said. “That’s how I feel about my job.”