Megyn Kelly Guests Battle Over Whether Sen. Feinstein Was ‘Whipped Into Subservience’ By Obama White House 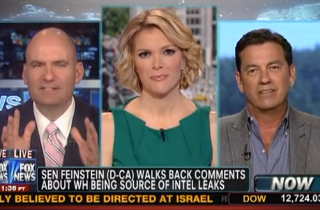 Two days after Sen. Dianne Feinstein (D-CA) said of the national security intel leaks that “I think the White House has to understand that some of this is coming from its ranks,” Fox News’ Megyn Kelly played host to a debate over whether Sen. Feinstein’s subsequent walk-back of her comments was a move under pressure from the Obama campaign. Conservative radio host Christopher Plante said Sen. Feinstein was clearly “whipped into subservience” by the White House, much to the chagrin of former Democratic aide Christopher Hahn.

Sen. Feinstein told the National Press Club on Monday that “I think the White House has to understand that some of [the intel leaks are] is coming from its ranks. I don’t know specifically where, but I think they have to begin to understand that and do something about it.” She later released a statement indicating regret for her comments, adding that “I did not believe the president leaked classified information. I should not have speculated beyond that because the fact of the matter is I don’t know the source of the leaks.”

Plante told Kelly that Sen. Feinstein “committed the classic Washington gaffe: she accidentally told the truth. … She tried to put the genie back in the bottle — you can’t have the truth out there, this is an election year. So she was whipped into subservience. Fealty is demanded by the party.”

Hahn took issue with how Republicans characterized Sen. Feinstein’s remarks, claiming that the Romney campaign essentially used her quote to “accuse the president of treason,” which Hahn says was “far from what Feinstein intended.”

Kelly then compared the Feinstein ordeal to that of Newark Mayor Cory Booker‘s walk-back following his comments defending Romney’s tenure with Bain Capital. Democratic aide Hahn responded that “in this day of political one-upmanship, there will be a lot of walking back going on. I’m sure Mitt Romney will have to walk back the statement he made on Monday when he talked about the president having at least a year for his policies to take effect. There will be a lot of walking back before this election is done on both sides.”

The two guests then squabbled over whether the current intelligence leaks represent a treasonous compromise of national security on the part of the White House, with Hahn warning his conservative opponent: “[Mitt Romney] is off American soil. He better watch what he says about this president because it will be taken as treason by me.”