Megyn Kelly Guests Clash Over ‘Enemy Combatant’ Designation For Suspect: ‘This Is The Ultimate Act Of Terror’
VIDEO

Megyn Kelly Guests Clash Over ‘Enemy Combatant’ Designation For Suspect: ‘This Is The Ultimate Act Of Terror’ 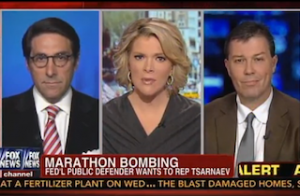 The morning after authorities in Watertown, Massachusetts took Boston Marathon bombing suspect Dzokhar Tsarnaev into custody, Megyn Kelly hosted a debate on Fox News over the Obama administration’s decision not to hold the suspect as an “enemy combatant.” While the FBI has already come under some criticism from the left for choosing not to read American citizen Tsarnaev his Miranda rights, the federal government is now facing critics from the right who think the suspect should not be tried in civilian court.

A group of Republican senators, led by Sen. Lindsey Graham (R-SC) made their feelings on the matter known when they released a statement Saturday urging President Obama to treat Tsarnaev as an “enemy combatant,” which would allow for “extensive, intensive interrogation.”

Jay Sekulow of the American Center for Law and Justice began the discussion saying he agrees with Graham’s assessment. “I think by declaring him enemy combatant, we give ourselves time,” he said, emphasizing that the American people don’t just want a “prosecution,” but an “investigation that will take more than 48 hours.”

Representing the other side of the argument, Democratic Strategist Julian Epstein cautioned against denying an American citizen the “right to counsel” and pointed out that the “public safety exception” being employed by the FBI allows investigators “a lot of latitude” without “going the enemy combatant route.”

Sekulow fought back hard, saying that when “somebody who is of Chechen origin took a bomb and put it next to an 8-year-old kid… I don’t look at this as just a murder, this is the ultimate act of terror.” He angrily explained why he thinks this attack was no different from 9/11, except in scope. Piling on the hypotheticals, Sekulow asked, “So, what do we do if we had caught Osama bin Laden in the United States and he had been given citizenship? I don’t think we would be running him through the U.S. District Court in Boston.” When Kelly said that we can expect the Obama administration to “Mirandize” the suspect before too long, Sekulow added, “that could come back to haunt us” and “what a mistake that could end up being.”