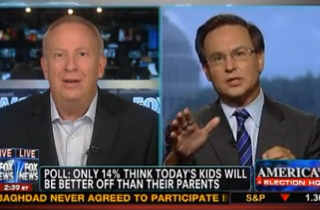 Things got pretty heated today during a debate hosted by Megyn Kelly on Fox News’ America Live. Conservative radio host Mike Gallagher and former Clinton adviser Simon Rosenberg were brought on to discuss a new Rasmussen poll that found that only 14% believe that children growing up today will be better off than their parents — a poll Kelly said she doesn’t want to make for partisan fodder. But the debate quickly became partisan, and aggressively so.

Rosenberg agreed with Kelly’s reluctance to attach a partisan message to the poll’s findings but did add that “this election should be about” which candidate’s messaging can reverse the negative feelings. But when Gallagher was given the chance to respond, he said “I’ll happily make it a partisan issue,” specifically blaming President Barack Obama’s administration for not “giving people the reason to dream” and adding that this poll is a result of the “disastrous leadership” of the Obama presidency.

“We’re going through a profound economic and geopolitical change,” Rosenberg responded. “The world is changing, and people feel we’re leaving one era that was pretty good and entering another era where they’re just not so sure whether things are going to be better.”

Kelly eventually referred back to the president’s now-famous “you didn’t build that” remarks, and asked her panelists whether the controversial comment — seen as anti-business by many conservatives — is part of the president’s problem of “not being a good enough messenger.”

Gallagher answered that “President Obama has been openly hostile and antagonistic towards what we used to believe was the American dream,” adding that the Democratic Party’s messaging “class warfare garbage.”

“This idea that somehow Barack Obama is against the American dream,” Rosenberg responded, “there’s probably no greater embodiment of what can happen in America than Barack Obama’s own story.” Gallagher attempted to interrupt Rosenberg again, but was met with shouts: “Let me finish! Let me finish!”

“No greater embodiment,” Rosenberg continued angrily, “than his own story of going as a child of Africans, a mixed-race person going all the way to the highest office in the land. I find this conversation insulting.”

“All you have to do is listen to President Obama’s words, and I don’t blame you for being angry,” Gallagher shot back. “You’re barking up a tree. No one’s buying what you’re selling. […] You can quote every statistic you want. You just heard the guy’s own words. I dare you to defend –”

“I’ll be happy to defend it right now,” Rosenberg said. “What he said was if we’re going to create prosperity and growth in the country, it takes all of us working together.”