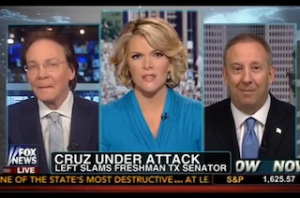 Freshman Senator Ted Cruz (R-TX) has become an increasingly controversial figure in American politics as evidenced by comments MSNBC’s Chris Matthews made this week comparing Cruz to Nazi sympathizer Father Coughlin. Fox’s Bill O’Reilly laid into Matthews last night for equating his “black Irish” looks with Cruz’s and today Megyn Kelly picked up the thread by asking what it is about the senator that makes liberals so angry.

Conservative radio host Mike Gallagher said people are only attacking Cruz because he’s “effective.” He said people are “impressed” with the “tea party darling” who “rose out of nowhere” and used this latest round of attacks on Cruz to demonstrate that “the attacks from the left, against conservatives, are way more visit vitriolic and vicious than anything we say about them.”

Liberal commentator Alan Colmes pointed out that it’s not just those on the left who are going after Cruz, pointing to Sen. John McCain (R-AZ), who famously called Cruz and some of his Senate cohorts “wacko birds.”

Kelly posited that the criticism may actually be “strengthening Cruz’s brand.” She compared the reaction Cruz has been getting to Sarah Palin, who “touched a nerve” and then “many in the press went after her and it sort of backfired because people on the right loved her more.”

“Liberals have never quite figured out that the process of demonizing a guy like Ted Cruz only makes him stronger,” Gallager agreed. “They’ve never quite grasped the idea. If they just expressed indifference or ignored people like Ted Cruz, he wouldn’t continue to build steam and momentum. They’re not bright enough to figure that out.”

Colmes tried to reiterate that Republicans seem to dislike Cruz just as much as Democrats do, but in the end Kelly gave Bill O’Reilly the last word on the subject in a clip from his show Thursday night. O’Reilly attributed Matthews’ attacks on Cruz to MSNBC’s declining ratings, saying, “I think it’s a desperate attempt by Matthews to get attention… he’s got to go on the attack because he’s got nothing else.”