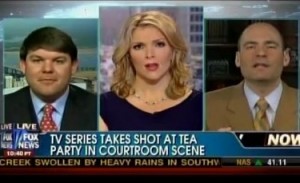 Unless you are a fan of CBS drama The Good Wife, you are most likely unaware of the plot line in this week’s episode which was “ripped from the headlines” of six months ago. The show featured a “Sarah Palin supporter“ played by actor Gary Cole named “McVeigh” who is also affiliated with the Tea Party movement. He is impugned by a bad guy opposition lawyer for standing near someone holding a racist sign. That’s a very short version of a much deeper context to today’s fiery debate hosted by Fox News anchor Megyn Kelly.

One of the oddest politico-cultural phenomenons to have risen in the past couple of decades is the exemplification of fictional characters by the political class to score points against one’s partisan opponents. Let’s call it the “Murphy Brown premise” which was created by former Vice President Dan Quayle, who took exception to a sitcom character for “ignoring the importance of fathers by birthing a child alone.” A more recent example is this episode of The Good Wife, over which Kelly led the debate with guests that included conservative radio host Ben Ferguson and Democratic strategist Christopher Hahn.

Update: this post has been edited since its original publication to more correctly reflect the story line of The Good Wife.