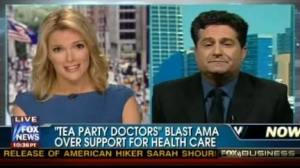 Earlier this afternoon, Megyn Kelly was conducting an interview with “Tea Party Doctor” Dr. Adam Dorin from the National Doctors Tea Party about his attacks on the American Medical Association over their endorsement of the Health Care Law. It was a fairly routine segment as Kelly asked him about his views and practice until, suddenly, things took a hard left turn as Kelly brought up a connection Dorin and his organization have to a website that believes Obama got elected through hypnosis. Once again, Kelly proved here that she’s a whole lot more than just another attractive face in an anchor’s chair.

The connection in question were posts on the website of the Association of American Physicians and Surgeons (which published the journal in which Dorin’s original claims were written and which is linked to on Dorin’s site as one of two sponsors) which purport that President Obama used hypnotic mind tricks during his speeches in the 2008 campaign (gee, why hasn’t he used any of those recently?). Kelly then read from this article, entitled “Oratory- or hypnotic induction:”

“In his Denver acceptance speech, Obama used the phrases ‘that’s why I stand here tonight,’ ‘now is the time,’ and “this moment” 14 times. Paces are connected to the lead by words such as ‘and,’ ‘as,’ ‘because,’ or ‘that is why.’ For example, ‘we need change’ (who could disagree?)…and…that is why I will be your next President.’

A flustered Dorin quickly explained that bringing up “some article that someone wrote” is distracting from the message. Kelly, however, made sure he admitted he didn’t believe the content in the piece before letting him continue. It was an impressive showing from Kelly who let Dorin get out his points before using some solid reporting to show why he and his organization’s claims should be taken with at least a couple grains of salt. The interview was fascinating and one might even say (ugh) “hypnotizing” to watch.