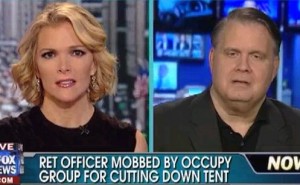 Rick Mingus was just an ordinary Washington DC ex-cop who liked to sit in the park — until one day, Occupy DC protesters pushed him over the edge…and he decided to pick up a pair of scissors.

Upset with the decay of McPherson Square, Mingus took matters into his own hands, risking life and limb by attempting to cut up the “Tent of Dreams’ tarp that quilted over the General McPherson statue — that is, until he was met with fierce resistance from Occupiers. “I’m a retired, tax paying citizen of Washington DC, and enough is enough with this!” Mingus told Fox News’ Megyn Kelly. “I’m not an avenging angel. I’m just an average person who has seen this park transformed into a beautiful spot where people can go for lunch, or just to go down and read a book, or whatever. It is now a desolate wasteland. The grass is gone. It is overrun by rats. It’s a dangerous spot. There are hypodermic needles all over the place laying on the ground. The place smells of urine, and it’s very disgusting.”

RELATED: Occupy DC Protester: Shouting Fox News Down ‘Does Not Help Our Image’

“I’ve had enough. because, you know, President Nixon used to call the American people the silent majority. Well, we have turned in now into the comatose majority, and something needs to give here. I mean our politicians don’t listen to us. For example, the Mayor of this city plus members of the city council has embraced these people. This has cost the city almost a million dollars in support, back up support for the US park police, or when these people decide to block a highway in the city, plus the trash pick up, and other items.”

On Monday, The Daily Caller’s Michelle Fields was a witness to how far the protest has degenerated. She valiantly faced down an Occupy DC protester who spewed a misogynist slur at her during an interview. Unfazed, Fields kept on reporting. “The cops were supposed to show up at noon to make sure that the protesters had removed camping equipment from McPherson Sqaure,” Fields told Mediaite. “The cops showed up at around 12:15pm to a swarm of media and then immediately left.”

Watch Mingus tell his tale below via Fox News: