Megyn Kelly, Kurtz Slam the Media for Not Correcting Record on Ferguson
video

Megyn Kelly, Kurtz Slam the Media for Not Correcting Record on Ferguson 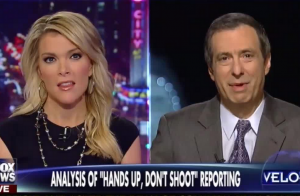 On Monday’s Kelly File, Megyn Kelly continued to go after those who refuse to admit that they were wrong about the “hands up, don’t shoot” narrative surrounding Michael Brown‘s death in Ferguson, Missouri. This time, she went after news organizations for refusing to correct the record, in a discussion with Howard Kurtz.

Kelly and Kurtz argued the media painted people who questioned the story or didn’t “rush to judgment” with the “media mob” as “racially insensitive” and apologists for the police. Kelly previously defended Washington Post liberal columnist Jonathan Capehart for admitting he was wrong about “hands up, don’t shoot.” Kurtz said it was “the cool thing to do” for the media to “rush to judgment” on what really happened.

Kelly said Darren Wilson is the “real victim” because he is out of a job while the main witness, Dorian Johnson, who the Department of Justice said gave untruthful testimony, is now employed by the city of Ferguson. They both ultimately concluded that the mainstream media will never credit Fox News with getting the story right form the beginning.